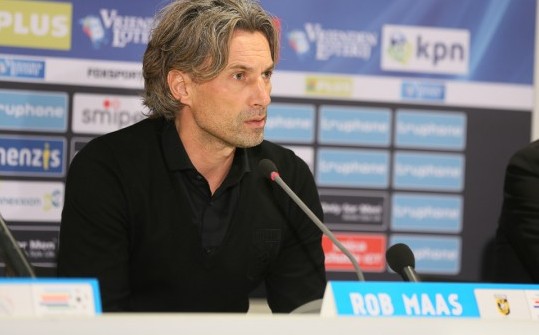 Our new Sports Director, Rob Maas was born on December 17th 1969, in Eindhoven. At the beginning of his footballing career, he had stops at FC Eindhoven, RKC Waalwijk and Feyenoord as well, winning the Dutch Cup twice with the Rotterdam club. Later, he plied his trade for Arminia Bielefeld and Hertha BSC in Germany, playing together with Pál Dárdai and Gábor Király in Berlin. He won the League Cup twice in the German capital. Following the Bundesliga, he joined German second league side MSV Duisburg, then returned to the Netherlands after two seasons, where after a stint at Heracles Almelo he once again joined RKC Waalwijk, retiring from the club in June of 2009.

As coach at RKC Waalwijk and Vitesse, he worked together with managerial institutions such as Peter Bosz (AFC Ajax), Ruud Brood (PSV Eindhoven) and Erwin Koeman (Everton FC). Following the departure of Peter Bosz, Maas, who had been Bosz's assistant, was appointed interim manager of Vitesse. Maas was later appointed manager of SC Cambuur. Then, after extensive talks, he was happy to accept our Academy’s invitation.

Rob Maas’ commitment to us may be considered as the next step in our long-term partnership with Vitesse. This is another way in which we would like to solidify our ties with the Dutch Eredivisie side, which have been official since the middle of 2016.

-It brings us great pleasure that as a result of our close ties with Vitesse, we have been able to attract to our Academy an expert who is well-known throughout Europe. With his arrival, the goal is to further develop the quality of our sports training. I have no doubt that with his professional approach and decades worth of experience, Rob will be able to bring new stimuli to the life of the Academy, and will be a positive influence with regards to the development of our coaches and players, said Tamás Szekeres, Managing Director of Vasas Kubala Academy.