HFF No less than three players from our Academy included in the narrowed down U17 Euro squad! 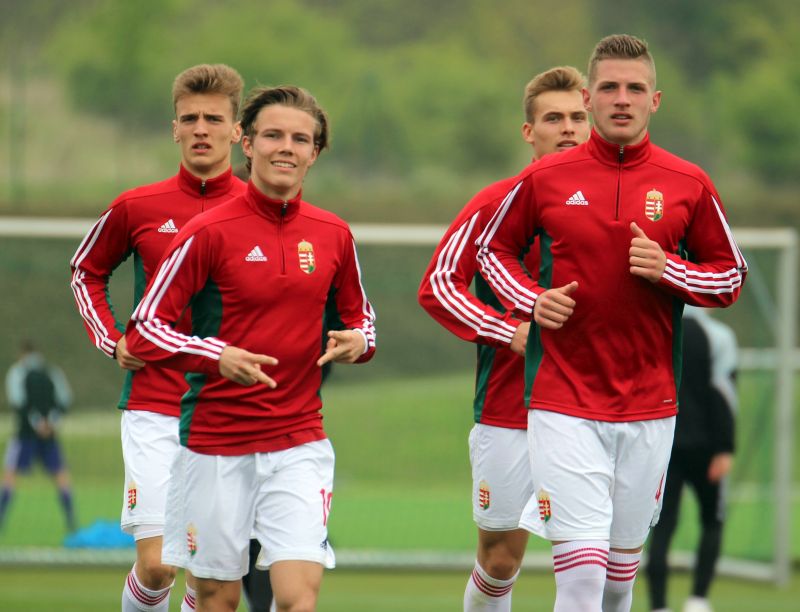 National team football was on the agenda this week for our U17 age group, with a number of our current and former academy players involved. Stationed in Telki ahead of the European Championships to be held in Croatia, the U17 Hungarian squad once again included Balázs Dominik and Balázs Opavszky, as well as summertime Vitesse-signee Márk Bencze, with Alexander Torvund’s name also making the list.

Balázs Opavszky is one of the footballers in Head Coach Zoltán Szélesi’s team who has been a stable member of the squad for three years now, since the very beginning.

-I feel like the team has come together, over the past few games we were able to demonstrate the collective strength that characterises us. Following the last match, against Norway, there was immense joy, because we had achieved the first real big success of the 2-3 year long road that we had set upon together. I have been a member of the squad for three years, the road has indeed been quite long. We’ve had some very nice, but also some very difficult moments. However, it fills me with great pride that they have counted on me all the way. Still, the road does not end here, everyone is already thinking ahead to the Euros in May.

Our players arrived in Telki on Sunday. Since then, the U17 squad has participated in a number of different programs. Dominik Arday has also become a member of the selection, and as he talks about his feelings, we are able to get a glimpse of the sort of joyful emotions that our young players experience.

-Being selected is an unbelievably inconceivable feeling, impossible to put into words. An incredible amount of willpower, humility and perseverance is required to achieve this, to be able to make it here, and to be able to represent your homeland in other countries. Just the fact that I can wear the national team shirt is tremendous. I think that if you want to become a footballer, and you are resolute enough, then this is also one of your big dreams in life.

Indeed, one of Dominik’s dreams in life seems to be coming true, as he is one of the members included in the narrowed down Hungarian U17 squad that will travel to Croatia. Through our player’s eyes we get a chance to find out about the most important moments of the last few days.

-We arrived in Telki on Sunday, and began preparing naturally mostly for the match against Turkey, but as part of the program we also had a day where coaches arrived from premier league clubs from all over the country. In addition to being proud to be able to start in today’s match, I was also proud of the fact that I could represent my club, Vasas Kubala Academy in a national team shirt.

As the main rehearsal before the Euros, our players clashed in a friendly match with Turkey in Telki, and all three of our academy players were named in the starting eleven. For Alexander Torvund, this is his first time participating in the program of the U17 Hungarian national team since acquiring citizenship.

-When I received the call-up for the U17 national squad set to travel to Croatia, I was honestly very surprised, because I had just recently acquired Hungarian citizenship, so I wasn’t expecting to make it so early at all. They took notice of me at the match against PFLA, where we were playing really well, collectively and also individually. It brings me extra pleasure to have made it to the national squad as a Vasas Kubala Academy player.

The friendly tune-up versus Turkey brought about an opportunity to prove himself, since the first minutes were absolutely dominated by the Hungarian selection, with an assembly line of chances in front of the Turkish goal.

-I was able to make it onto the pitch in my first match, helping my team with relatively good play. Having known a lot of them from before, my teammates took me in and accepted me very quickly. That is part of the reason why we also had a great understanding on the pitch. We were able to apply pressure on the Turks, possessing the ball, and I was able to create two chances.

The game played against Turkey in the main rehearsal was useful, as our team can look forward to facing opponents of similar strength in Croatia. The narrowing of the squad has taken place, and our players are ready to travel...

-Now that I’m part of the squad, I have to train with a mentality of 120% concentration. I will do everything in my power to remain a member of the squad, and if I get a chance to make it onto the pitch at the Euros, I will give it my best!

With the Zagreb draw in the beginning of April, it was decided that the U17 Hungarian selection will have to go through French, Scottish, and Faroese opponents to make it to the quarterfinals of the Euros, which kick off in the beginning of May. Our former academy player, Márk Bencze is also travelling to Croatia as part of the squad.

-We’ve been preparing for a very long time –since U15-, to make it to the U17 Euros. We are the first age group that has been able to qualify for 11 years to the continental tournament, so we are very happy to have been able to achieve this success.

Our former player did not play in the match against Turkey, but did watch the action from the stands. What was the reason behind the absence? The Dutch premier club Vitesse’s footballer let us know:

-The reason I couldn’t play today is because I played in a match yesterday in Holland. After the squad is narrowed, I have faith that with my play, I will be able to help the team perform successfully and to achieve victories.

Márk also provides his opinion on what he thinks was the key to the selection’s continuously good play, and how he is preparing for the important period that lays ahead.

-I think that this success is based on our unity, the fact that we try to play not as individuals, but rather to function as a unit! We are very happy to have made it to the Euros, but our task is not nearly finished, as we have very important matches in front of us against Scotland, France, and the Faroe Islands. Of course, the first priority is to qualify for the U17 World Cup, which will take place in India in October.