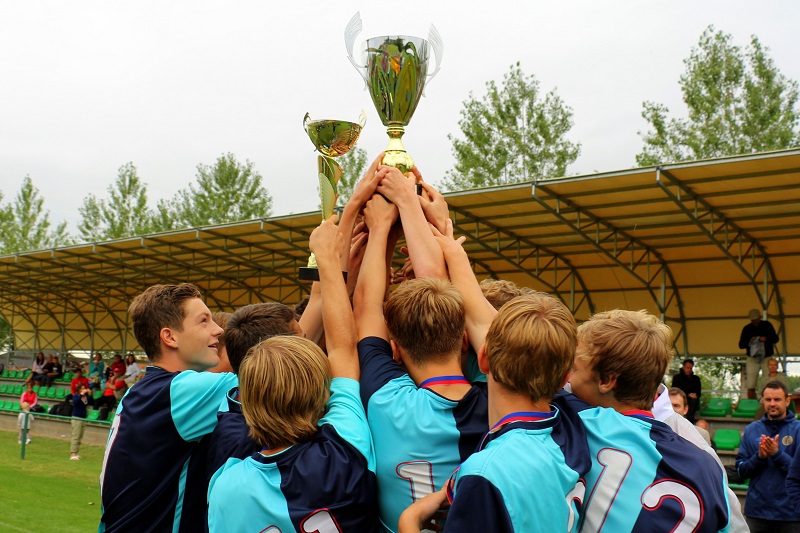 The János Farkas Tournament can now look back on an illustrious history, as it has been held since 2008 at the beginning of each August for the U16 age group. All Academy players know and respect János Farkas’ name and achievements. The club icon after whom the tournament takes its name is a pillar of the Vasas family, and an Olympic champion footballer whose career stands as a wonderful example for the youngsters to follow to this very day.

Tamás Szekeres – Managing Director, Vasas Kubala Academy:
-This year’s János Farkas Tournament was the highest quality event in the history of Vasas Kubala Academy. Not just from a sporting perspective, but in all regards: professional organisation, live broadcast, quality catering, accommodation, and transfer typified the two-day event, thereby raising the overall standard to another level compared to the years before. Let’s not forget to also mention the fact that we had the opportunity to play on a perfect grass pitch surrounded by covered seats, thanks to Üllő Sportcentrum. As opposed to the rather extreme weather we had over the previous weeks, we were able to stage the illustrious international tournament in quite favourable conditions this time. We had the honour of hosting one of Sweden’s finest teams in Malmö FF, one of the Czech Republic’s best teams in SK Slavia Praha, one of the Netherlands’ most famous academies in SBV Vitesse, one of Cyprus’ most outstanding youth training centres in AC Omonia Nicosia, as well as NK Domzale, who along with NK Maribor play a key role in Slovenian football.  We were able to bring in the best of the clubs that stand close to us in terms of quality, thus ensuring a very high sporting standard at the tournament, as anybody was able to beat anybody over the two days. It brings us great pleasure that the feedback received from participants is without exception all positive, and that they wasted no time in letting us know: they would be glad to take part next year as well, at the 2018 edition of the János Farkas Tournament.

Ronald Van de Bovenkamp – Section Director, SBV Vitesse:
-Our players began their preparations with three training sessions this week in Holland, then on Friday we were already off by plane to Budapest, so we don’t yet have an entire training camp period under our belts. Nevertheless, we played good matches, winning the first one against AC Omonia Nicosia, but then losing in the second one versus SK Slavia Praha. My players were a bit tired, as they had just come back from vacation, so this challenge turned out to be rather tough, but then on Sunday we had another very good game against Malmö FF. It is great to play versus international opponents with a style that is different from the domestic opposition we are used to, because it is a good opportunity to gain experience. For us, it is a real plus to work together with a club like Vasas Kubala Academy. We have a great relationship, under the framework of which it will be our turn to play host to the Academy this autumn. I am certain that will also be quite useful, in terms of gaining experience playing against Dutch and German teams.

The participating teams were drawn into two groups beforehand. Based on this, Malmö FF, NK Domzale and Vasas Kubala Academy were placed in Group A, while Group B was comprised of SK Slavia Praha, SBV Vitesse and AC Omonia Nicosia.

Attila Herédi – Academy Sporting Director, Vasas Kubala Academy:
-These two days have a chance to become a very important piece of the learning process. Our players had the opportunity to experience just how far ahead of them other top flight clubs in their age group are, and if they really paid attention, they could also ascertain where their opponents’ weak points were. From all points of view – be it for the sporting staff or our academy players – this tournament provided us with so many lessons. During the two days everyone was able to play three matches that afforded them the opportunity to react to new impulses, thereby gaining the sort of experience that is different from what is available domestically.

The 2017 János Farkas Tournament saw AC Omonia Nicosia finish in 6th place, with Vasas Kubala Academy placing 5th, and Malmö FF in 4th. SBV Vitesse won bronze, while second place on the podium was occupied by NK Domzale, and the victors of the tournament were SK Slavia Praha.

Peter Mikolanda - U16 Head Coach, SK Slavia Praha:
-I think that this was an amazing tournament. We had wonderful, ideal weather for playing football, which also favoured our fans. It’s been a very difficult two days. I am aware of the fact that the spectators and the coaches will say that in fact we had an easy time, because we scored a lot of goals while only conceding two, but our players and our staff all know that it was tough to play against all of our opponents. My players deserve great respect, as it was particularly difficult to play versus NK Domzale in the final. We faced up against Omonia Nicosia and Vitesse in the group stage, but there were very entertaining contests in the other half of the draw as well. I saw a lot of good footballers this weekend, players who we will see in first teams or even national teams in 3-4 years’ time – I am sure we will hear from them in Europe’s leagues. The help provided to us by Vasas Kubala Academy’s staff throughout the tournament was great, thanks to them for the organization and the media as well. We are very happy to have won the tournament and to have been able to be here, due to the friendly atmosphere that was developed here. We will also be very happy if we are invited again next year.

One could discover a number of national team players in the six participating clubs’ squads over the two days, but the performance of Donát Varga of Vasas Kubala Academy is undoubtedly noteworthy. The international environment is not new to our talented young footballer. During Vasas Kubala Academy’s previous season, he was part of the U14 team that won the Nike Premier Cup domestically, and so was able to travel to the Berlin Final. He can also be proud of his successful trial at Bayer 04 Leverkusen from a few weeks ago. At the moment, he participated at this international tournament playing in an age group one year above his age, but this didn’t deter him from being able to score twice versus the opposition from Cyprus.

Donát Varga - U16 player, Vasas Kubala Academy:
-It is a great honour for all academy members to be able to represent our Academy at the international tournament named after János Farkas, who is a legend and an icon, and I believe someone who can be a role model for any young footballer who dons the Vasas shirt. I had to prove myself among players who are a year older than me, against well-known international teams. I am happy that I was able to win some races for the ball and 50/50 situations as well among older opponents – this gives me confidence going forward. When playing in the domestic league, we have more possession of the ball, we control the matches, but our opposition here was able to control the ball better, and also their passes were stronger and more precise, that’s why we were overcome by NK Domzale and Malmö FF. Naturally, I am very glad to have been able to score twice versus AC Omonia Nicosia on the second day, contributing to my team’s victory that enabled us to finish 5th. I am very happy that Vasas Kubala Academy places great emphasis on international competition, because this allows us to experience first-hand what aspects of the game international teams are ahead of us in. We will have to work even harder and with even more dedication in the future, to be able to make it as professional footballers. Go on Vasas Kubala Academy!