U14 VASAS KUBALA’S U14 AGE GROUP CROWNED CHAMPIONS OF THE 2017 NIKE PREMIER CUP! 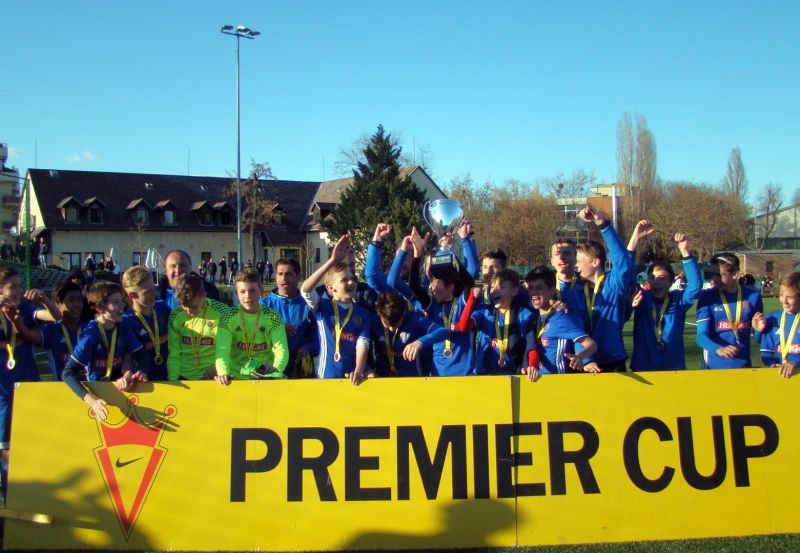 Vasas Kubala Academy’s U14 age group competed in a two-day program over the weekend as part of a special event. The setting for the Hungarian final of the 2017 Nike Premier Cup was Ferencváros’ Sports Center in Népliget. This was the 20th time that the quality event has been held in our country, with the domestic finalists consisting of teams from the current U14 top tier and second tier championships.

Zoltán Pál Head Coach’s talented youngsters played two matches on Saturday, earning a 2-0 victory over MTK Budapest, then drawing 0-0 with Budai FC Tabáni Spartacus, thereby advancing to the tournament’s last eight. The competition continued on Sunday, with Vasas Kubala Academy, PFLA, DVSC-DLA, FTC, UTE, MTK Budapest, DVTK, and Budai FC Tabáni Spartacus all vying for a spot in the semifinals. Our academists’ next opponents were the team from Felcsút, and following a 1-1 draw, we were able to go through on penalties. We then triumphed by a score of 3-1 over Debrecen in the semifinals, which meant that we could go on to face UTE in the deciding match. The final score versus the purple-and-white squad turned out to be 2-0. The victory, peppered with pride and joy, amounted to first place at the 2017 Nike Premier Cup. In addition to the gold medal, Vasas Kubala Academy also received a special prize, as our talented academist, Attila Nguyen Viet, was voted Best Player of the Nike Premier Cup. As champions of the prestigious event, the U14 squad and Zoltán Pál Head Coach have earned their way to Nike Premier Cup’s final in Germany, which will take place in Berlin, from May 5th to 8th this year. Vasas Kubala Academy will therefore represent Hungary at the international tournament hosted by Hertha BSC. Our academists will have the opportunity to match up with teams such as FK Sahtar Doneck from the Ukrainian top league, AC Sparta Praha from the Czech first division, SK Brann from the Norwegian top tier, as well as Swiss side FC Zürich, among others. We hereby congratulate our U14 players as well as the sporting staff overseeing their preparation for this prestigious victory. Finally, best of luck for the finals in Germany!