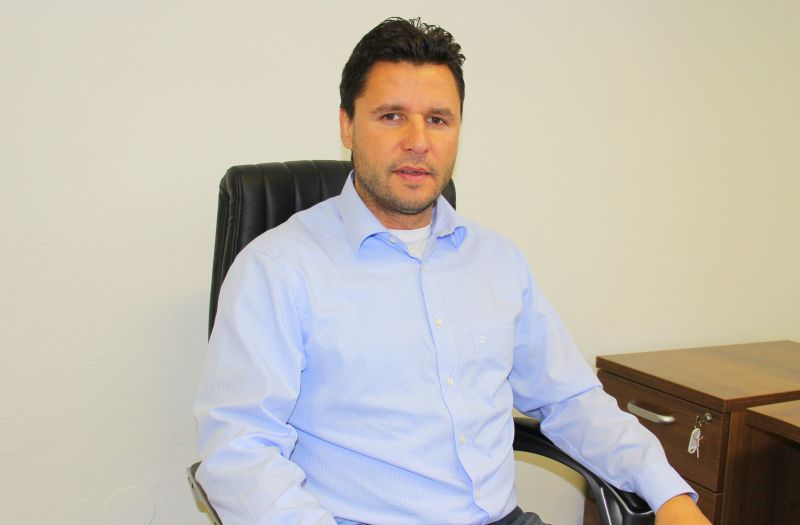 The name Tamás Szekeres is well-known to those who love football and take an interest in the sport. During his professional career, the former Hungarian international had domestic stops at Ferencváros, MTK, Újpest, Debrecen and Sopron, while also leaving his mark in Belgium, Germany, and Norway. He won four Hungarian League Titles, seven Hungarian Cups, and three Hungarian Super Cups, along with a triumph in the Norwegian Cup. Following the conclusion of his career as an active footballer, the 44-year old began his career as a sporting director by becoming the Technical Director of the Hungarian Football Federation. This was followed by a stint as the Director of Development at Ferencváros, then as Director of Groupama Arena. However, the position of Managing Director at Vasas Kubala Academy presents an altogether different project for the former professional footballer. The sporting expert was named to his new position at the beginning of the 2016/17 season, and we spoke to him about the transitional period after his arrival, as well as about what kind of challenges the tasks ahead presented to him.

-It was in the spring of 2016 that the possibility of me coming here was first broached, so you can see it is the result of a lengthy process that I arrived here. There began a long period of talks among Tamás György, the majority owner of the Academy, Csaba Csúri, then Managing Director, and myself, and I came to see that this project is the sort of possibility that I could not pass up. I looked upon the mandate as a challenge, because I have a belief that with what I bring on board, I am able to add the necessary extra that is required for us to succeed in the work that lies ahead. My decision was influenced by several factors, but the most important one was the fact that I came to know a well-structured academy as far as the organisation was concerned, which was a good starting point for quality work. As time goes by, I see more and more clearly the path to development, and where there need to be changes. The framework is given, but we have to fill it with more and better content. For a long time I had doubts about whether I would ever take on work again in the field of football in Hungary, but I knew if I ever did, it would have to be somewhere where ownership and I share a belief in the same principles, and where they would allow me the freedom to work independently. At Vasas Kubala Academy, all of this is given. I see immense potential at this club, the realisation of which can only be reached with loads of work and quality professionals, as well as collective ideas and development. I believe that the Academy can quickly become one of the best – or thee best – academy in the country. Many conditions have to be met in order for this to happen, for example this is why our infrastructure is under development.

Since the appointment of Tamás Szekeres, enough time has passed now for us to get an impression of and to be able to evaluate the path taken. We’ve seen a number of changes and developments under the guidance of the Managing Director of Vasas Kubala Academy since June of 2016. However, the summer past is naturally just one part of the lengthier period during which we will be able to witness more substantial changes and progress.

-First and foremost, the most important task is changing the attitude and approach, because the Academy’s greatest challenge at the moment is having to operate it in the local environment. This means that there is no exemplary model in front of us to follow, one which we could adhere to without any questions asked, allowing us no hesitation in certain areas. The previous four to five years in the life of Vasas Kubala Academy have been about laying the foundations, and now we have entered into a phase of correcting mistakes. The result of our work is exemplified by the quality of the players who come out from our system, so this has to be of the utmost importance to us. Despite the fact that our Academy is already among the best in Hungary, we cannot be satisfied, and must always strive to be the best. I want each and every colleague working here to feel ownership of the Academy. It is not enough to perfectly perform a given task, in an Eastern European mindset; without a proactive and creative approach, the individual and the Academy cannot develop. It was during my years spent in Norway that I experienced – and came to very much appreciate – the fact that every person put that something extra into the collective work which was their own specialty, something that only they knew. If I set high standards for myself in my work, then I look for opportunities to see how I can perform even better, how I can become even better. At the moment, we have several professionals working at the Academy who are receptive to new ideas, who are always looking to learn and develop. We are constantly providing opportunities for them to be able to fulfill themselves in their area of expertise, thereby helping our collective development. This is the frame of mind that I would like to see on the pitch as well, from the players. We need to create more competition: I don’t want to see kids who are spoiled and who have grown too comfortable; kids who are wearing outrageously expensive shoes and too cool apparel, playing on good pitches and tutored under great conditions, but without any demands placed on them to step outside their comfort zones and to suffer for success, struggling and fighting for victory. If someone doesn’t have it within them deep inside to work more and more for success, then they will definitely not become a professional footballer – they are destined to fail.

Managing Director Tamás Szekeres’ words may be strong, but they are honest, and they arise from the path he has taken, so they are well founded and credible from both the humane and the professional point of view, based not only on his current position, but also on his footballing career and the success he has enjoyed. In addition to steering Vasas Kubala Academy as Managing Director during the week, as well as following our players’ training and matches, he also finds time over the weekend to put on his football boots and participate in his beloved sport, football. His life path is a great example to follow for young footballers, so his observations and advice are well worth considering.

-If I had to briefly summarise what sort of advice I would give to young footballers today, then based on my experience, there is one thing I would definitely highlight. Do not look upon talent as a skill given at birth! Current research shows us that talent is actually in the mind. We are able to learn everything. For some, this is a faster process, for others, more difficult and slow. It is the length of the path taken that may differ from one person to another. The time needed to learn something is determined at birth, but how far we can go is not! Young players must realise that everything can be learned! Everyone can learn to kick with their weaker foot, everyone can learn to head the ball, or to tackle, and everyone can be faster! There are three very important factors that every young academist needs to pay attention to. The energy that is applied towards training is decisive. Star players do not become the best simply because they were born that way, but because they spend incredible amounts of time practicing!! The second factor is the quality of work, the level of enthusiasm, inner focus and intensity that is applied in training. And the third important factor in development is what type of training work I am doing, what sort of coaching am I receiving; do my coaches notice what type of exercises I am able to develop the most quickly with? It is the sum of these three factors that will be decisive at the end of the road in determining who will become a good top flight footballer, or international player, or maybe a player who can or cannot also prove themselves abroad. For some, six months is enough to pick up a certain skill, while for others this can take 3-4 years. There is no such thing as impossible; if someone wants to get better with their every last fiber, and puts everything they have into it, then they will succeed. And we here at Vasas Kubala Academy have to provide everything that is possible in order to support these aspirations!