VKLA INTERNATIONAL CONFERENCE AT THE ACADEMY 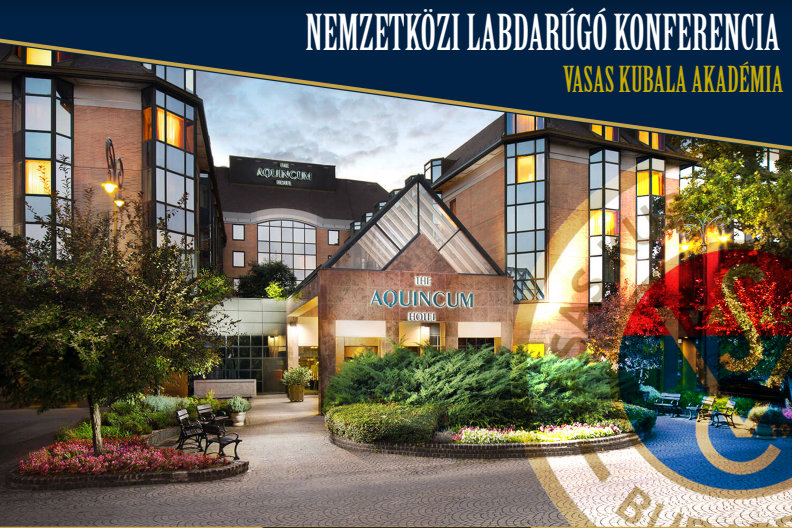 Vasas Kubala Academy’s international technical conference, of special significance within the framework of our subcentral series of programmes, took place in the fall of 2017 at the Hotel Aquincum in Budapest.
The event, encompassing both theoretical and practical elements, saw a Dutch and an English expert present their footballing philosophy, which is based on the creativity of players and the development thereof, with the belief that every footballer must be approached differently. Every player needs to be developed differently, and finding the customised key to unlocking the potential of each footballer is one of the main tasks of managerial work. Through practical examples, we gained insight into why Barcelona can be considered horizontal, and why Cristiano Ronaldo is vertical. We also learned about why José Mourinho and Eden Hazard couldn’t get on the same page at Chelsea. One of the presenters, Jan Reurings, also spoke about the current crisis facing Dutch football in an interview for the online version of the local sports daily, Nemzeti Sport. Meanwhile, the Managing Director of Vasas Kubala Academy, Tamás Szekeres, spoke about the situation in Hungary in general, and the academy’s own philosophy in particular, drawing a parallel with the topics touched upon during the presentations. The issues mentioned are in line with the goals of the Change of Perspective series launched by Nemzeti Sport Online at the beginning of the year, which is also why we accepted the invitation to attend. The conference was comprised of presentations given by Jan Reurings, who has been employed by the Dutch Football Association for over thirty years and is currently an instructor in their managerial training program, and his pupil, Ryan Smart, on topics such as nurturing of talent, managerial roles, genetic traits, and football player types, among others. The theoretical lectures in the morning were followed by practical presentations in the afternoon: Reuring and Smart demonstrated during training the philosophy they represent. Participating in the conference at the invitation of Kubala Academy – as regional centre – were about 50 representatives of its inherent subcentres, among them former National Team players such as Zoltán Bükszegi and Péter Czvitkovics.